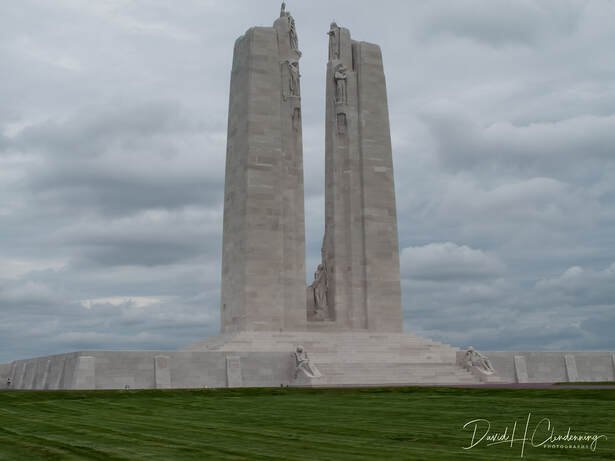 The Prime Minister, Justin Trudeau, announced today that he will travel to France from April 8 to 10, 2017, to attend commemorations for the 100thanniversary of the Battle of Vimy Ridge. He will join His Excellency the Right Honourable David Johnston, Governor General of Canada, Their Royal Highnesses The Prince of Wales, the Duke of Cambridge, and Prince Harry, as well as Kent Hehr, Minister of Veterans Affairs and Associate Minister of National Defence, Harjit Sajjan, Minister of National Defence, and General Jonathan Vance, Chief of Defence Staff for the Canadian Armed Forces.
Quotes
“The Battle of Vimy Ridge was a turning point in the First World War and for Canada, when Canadians acted – and fought – as one. At Vimy Ridge, we will mark this great victory, and pay tribute to every Canadian who answered the call to serve. Canada enjoys peace and freedom today because of their sacrifices, for which we are forever grateful.”
— Rt. Honourable Justin Trudeau, Prime Minister of Canada

“The victory at Vimy Ridge was made possible through the combined efforts of Canada and its allies. It is fitting 100 years later to walk side-by-side with our allies to reflect on our victory, commemorate this milestone, and renew friendships as we continue to work together to defend freedom and democracy around the world.”
— Rt. Honourable Justin Trudeau, Prime Minister of Canada

Quick Facts Associated Links
It took Walter Allard two years to source the limestone an abandon Roman quarry on the Dalmation coast, which is now part of Croatia. Six thousand tons were quarried and shipped. The work started in 1923 and the first job was to clear the site of unexplored shells, trenches, dugouts and mine craters. The network of tunnels used by the troops to reach the front line had to be filled and each part in the construction site had to dug by pick and shovel, resulting in many men injured and killed.

War and Peace Ever Linked Together
In the base foundation, 15,000 tons of concrete and steel bars were used to support the pylons. On and around the memorial are 20 double life-sized statues, all carved on-site. The most noticeable is the main statue facing the Douai Plain, "The Spirit of Canada Mourning Her Fallen Sons, ", sculpted from a single 30-ton block of limestone.

In the centre of the bastion is the tomb of the Fallen Canadian Soldier and around the base in scribed the names of 11,169 missing Canadians with no known graves, lost during the fighting in France. 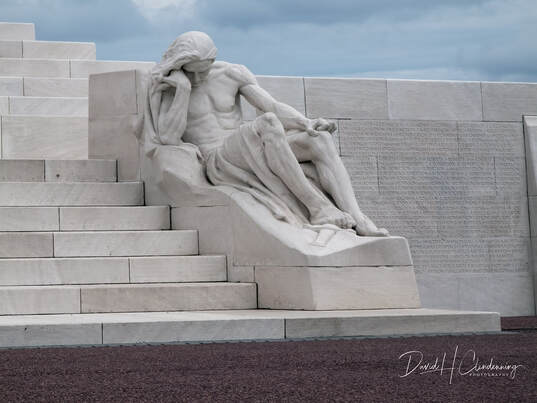 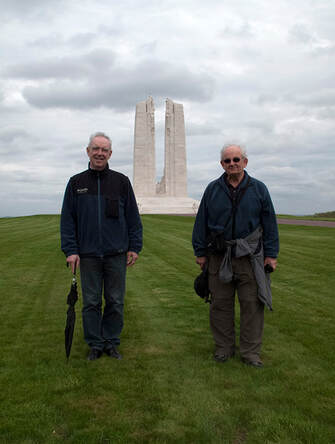 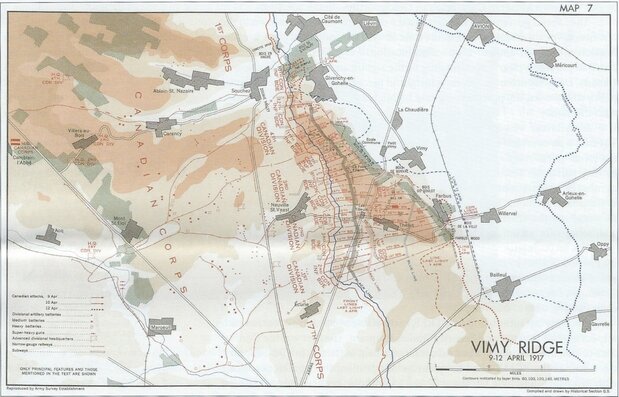 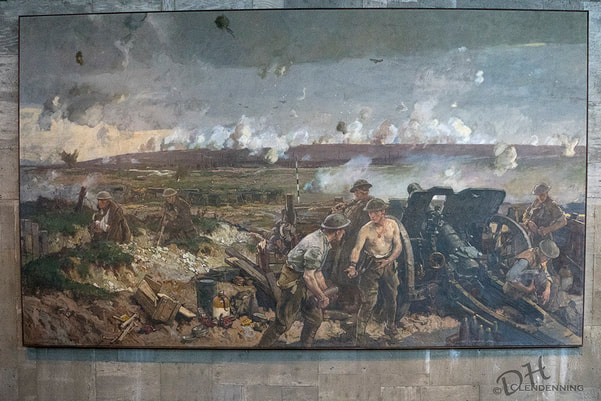 A War of Inches

This war over land was fought in trenches. The area known as Flanders in western Belgium is low-lying agricultural land supported by a system of canals.  It was important to both sides of the conflict because it offered access to the North Sea. It was here that Major John McCrae was sent as the 42 year old surgeon to First Brigade Artillery. The area contained a very large contingent of Canadian military, providing back up to the French and Algerians.

Canadians' gallantry in the trenches of Flanders

"It was hell all the time. We really expected to die in our tracks. We never had our boots off, much less our clothes."
Major John McCrae, MD

Appointed in January 1918 as Consulting Physician to the British Armed forces with rank of colonel, McCrae moved away from the front lines. Contracting pneumonia and suffering from cerebral meningitis, he died on January 18. He is buried with full military honours in Wimereux, France.

In Flanders Fields the poppies blow
Between the crosses row on row,
That mark our place; and in the sky
The larks, still bravely singing, fly
Scare heard amid the guns below.
We are the Dead. Short days ago
We lived, felt dawn, saw sunset glow,
Loved and were loved, and now we lie
In Flanders fields.

Take up our quarrel with the foe
To you from failing hands we throw
The torch; be yours to hold it high.
If ye break faith with us who die
We shall not sleep, though poppies grow
In Flanders fields.

First published in December 1915, McCrae’s “In Flanders Fields” remains to this day one of the most memorable war poems ever written.