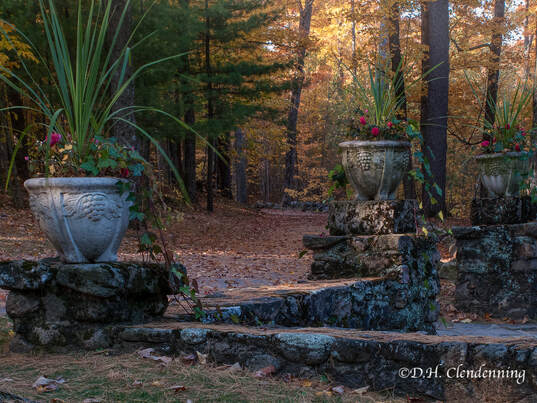 Title: Quite wooded path in the Fall. Order No.: A1-7743. Location: Kingsmere, Quebec
Pontiac Region along the Ottawa River
Montreal 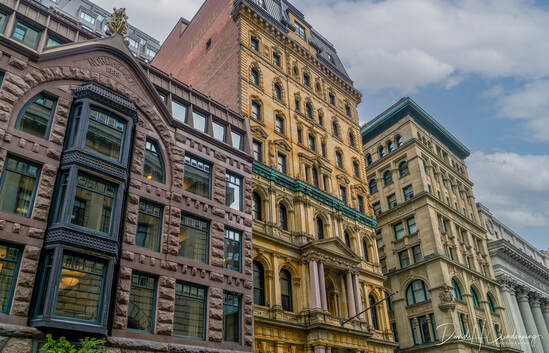 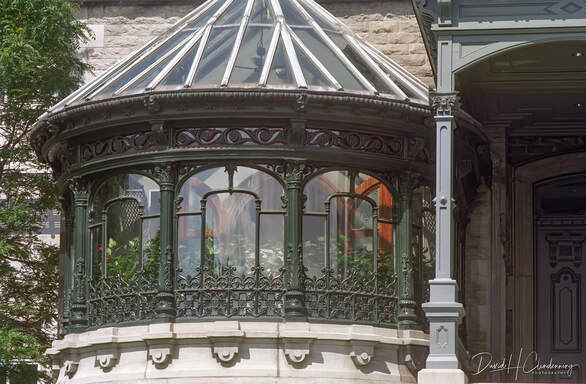 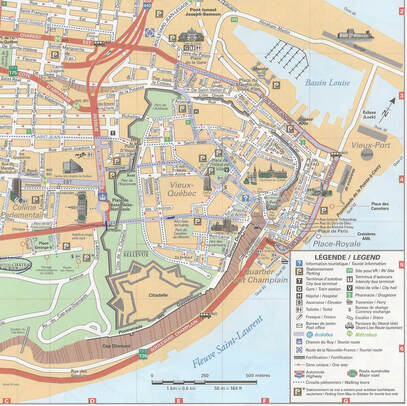 Map of Old Quebec City
The fountain depicts four children on the upper level celebrating fishing and seafaring, the characters beside the main pool (seen in this photograph)  representing the river gods of Ancient Greece and the water nymphs known as Naiads, and the fountain fish, frogs, shellfish, and aquatic plants.
Click on image to enlarge
Chateau Frontenac. & Dufferin Terrace Promenade, 19th century
Three terraces

The first Durham terrace
In 1838, four years after fire attacked the Château Saint-Louis, then-governor of the colony Lord Durham proposed the first terrace, which would bear his name. Fifty metres long and 15 wide, it was built on stone pillars.

The Dufferin Terrace
During the 1870s, governor general Lord Dufferin proposed an expansion project for the terrace. A strong proponent of the conservation and presentation of the fortifications, Dufferin proposed extending the Durham terrace some 300 meters toward the Citadel. Along with the construction of six kiosks – Plessis, Dufferin, Victoria, Lorne, Frontenac, Princesse Louise – the project saw the light of day in 1879. The same year, the first funicular linking the upper and lower towns was completed. Its upper reach was the basement of the former Château Saint-Louis.
A Royal Promenade and boardwalk offers the city's best view of the Saint-Laurence River and Old Quebec.

Dufferin Terrace is an extension of the Durham Terrace, itself built-in 1838, on the ruins of the Château St-Louis terrace (destroyed by fire in 1834). The Durham Terrace became so popular that in 1854, it was decided to extend it by 35 meters and modernize it by adding lampposts and a cast-iron railing.
Unchanged since 1879, we owe the terrace as we know it to Charles Baillargé and Governor-General Lord Dufferin. Thanks to them, it goes from 85 to 430 meters, and 6 kiosks were added, including a bandstand.


View looking north with the Chateau Frontenac at left and viewing pavilion at right; Inside the walls of the upper town the rubble of the Château St Louis formed the base of Dufferin Terrace, 1838 (inauguration) - 1878 (creation), a spacious promenade dominated by the Château Frontenac Hotel (1892-1895), a fantastical French Renaissance Revival design by Bruce Price. Charles Baillairgé, Architect and Engineer (1826-1906), designed the cast and wrought iron railings and  kiosks on the Terrace.

Dufferin Terrace is one of the great urban schemes of 19th-century Canada. A memorable landmark, the boardwalk featured picturesque green and white kiosks of iron with national emblems beneath the arches. These gazebos overlook Lower Town and the Saint Lawrence River. The six kiosks are named after three former governor generals (Frontenac, Dufferin and Lorne), the first bishop of the Archdiocese of Québec (Plessis), one queen (Victoria) and her daughter (Princess Louise, who was married to Lorne). The national emblems were also in the design of the extensive iron border fence stretching along the terrance.

The first section of the terrace was built on the site of the ruins Chateau  St. Louis, built in 1647, which was destroyed by fire  in 1834. In 1838 the first  boardwalk was build and it was so popular that it had to be lengthened in 1854. Street lamps and iron railings were added.  In 1878, the corner stone of the new terrace or extension was laid by Lord Dufferin and the iron railing was kept and made to run the length of the boardwalk.  At a later period, it was still further lengthened and  the magnificent 200 -foot high  boardwalk is now some 1400 feet long. In 1885, the first electric streelamps in North America were switched on here. In 1898 the statue of Champlain was erected at the far end of the boardwalk.

Use of Iron for decorative purposes
New development in construction technology, the publicity surrounding the erection of the Crystal Palace in London in 1851, and current American experiments with cast and wrought iron, architects began to use iron for decorative purposes and to integrate the material into the structural fabric of buildings. Architects now specified the use of iron columns into the walls to keep the structure from shifting. Moreover, architects specified the use of iron columns to support the mezzanine and cast iron for ornamentation. For example, the graceful iron fence and gates enclosing the cathedral of Notre-Dame in Quebec city. 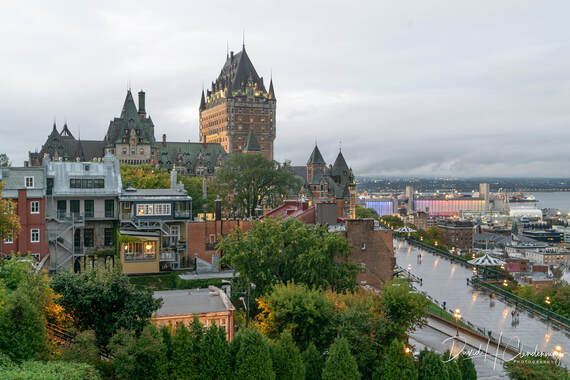 Title: View of Chateau Frontenac, Dufferin Terrance and Harbour, from above Ave Saint-Denison on a rainy Day, Order No.: A1-4026. Location: Quebec City.
Sections of the Dufferin Terrace Iron fence are attributed to the Wm. Clendinneng Foundry, Montreal, 19th century 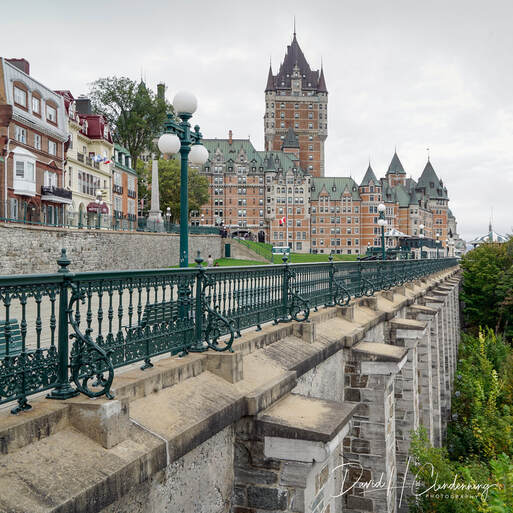 Title: Chateau Frontenace & Dufferin Terrace. Order No.: A1-3886. Location: Quebec.
Dufferin Terrace derives its name from Lord Dufferin, formerly governor of Canada, at whose suggestion it was built on the grounds occupied by the old Chateau St. Louis, destroyed by fire in 1834. On the boardwalk platform are to be seen two Russian guns captured by the English troops in one of the battles of the Crimean War. It was electrified in 1885 and, shortly thereafter, ice slides were set up. The terrace's kiosks and public benches introduced Quebecers to urban fixture making to those found on Parisian boulevards and created a lively, bustling atmosphere.
These photographs show Dufferin Terrace with its ornamental iron railings and row of picturesque kiosks along the footage 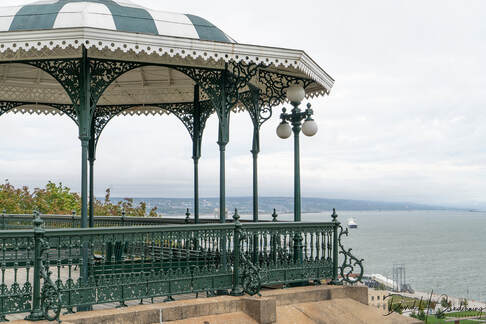 Original Dufferin Terrace: First 60 feet began under Lord Durham in 1838, next to the Saint-Louis Fort, which Champlain erected at the top of the cliff in 1620. In 1854 a further 170 feet was added (Henry Hatch, general contractor), and a final 1400 feet up to the Citadel Wall was completed in 1879. The kiosks were designed by Charles Baillairge, ca. 1900. The terrace owes its name to Lord Dufferin, the popular 3rd governor general of Canada from 1872 to 1878. The is one of the few people who fought against the demolition of the fortifications, which we can still admire nowadays all around the city.
Other important iron elements in Quebec City
The stone and iron fence which enclosed Venner's plot at the Saint-Charles cemetery was put up in 1857-8 and is an exact match with the Charles Baillairge's fence in front of Notre-Dame Cathedral of the same date.
Stained Glass in the English Cathedral of the Holy Trinity, Quebec City (c.1800-1804), Palladian architecture.
See more stained glass at Stained Glass Canada section
Morrin College/Former Quebec Prison
Isle d'Orlean
Charlevoix Region along the North Shore
Baie Saint-Paul
La Malbaie, Charlevoix Region 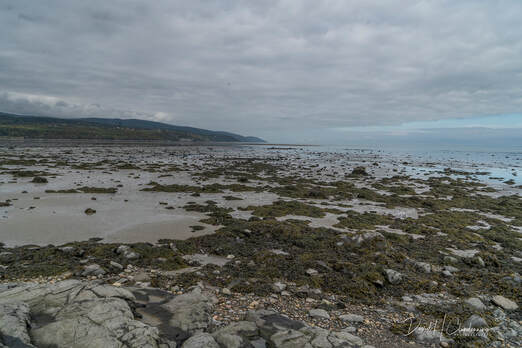 Title: Beach at La Malbaie. Order No.: A1-4075. Location Charlevoix region
La Malbaie region of Charlevoix was once the vacation province of wealthy American families and international celebs like Mary Pickford, Charlie Chaplin, and the king of Siam. A young William Howard Taft visited here is 1892 and remarked on its wonderful air quality, and made it his destination for the rest of his life. The French-Canadian villages known collectively as Murray Bay were the nexus of the "Newport of the North" and enjoyed a lively heyday from the 1870s into the 1950s.
Murray Bay Protestant Church, La Malbaie  -  The Tiffany Stained Glass
The Church's famous Tiffany stained-glass is dedicated to the memory of Dr. Samuel Beach Jones (1842-1910), a physician from New York City and a summer resident of Murray Bay.  The satined-glass made by Louis C. Tiffany was installed in 1915, thanks to Rose Tiffany, owner of the La Rose on the Boulevard des Falaises (on road to the Fairmont Manoir Richleau Hotel) . This is one of only three sites in Canada having Tiffany stained-glass.
Near Remy, Charlevoix
Near the Mouth of the St. Lawrence River 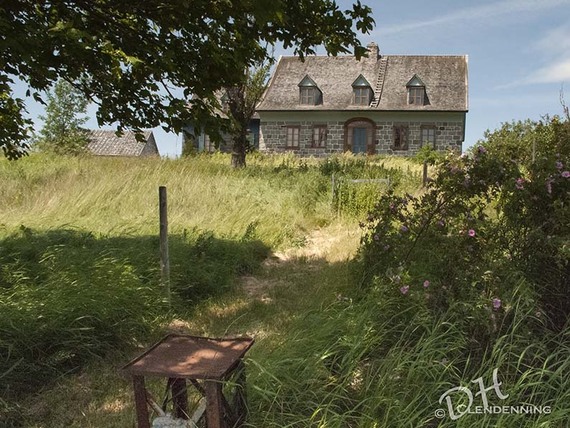