Glass from the Islamic World 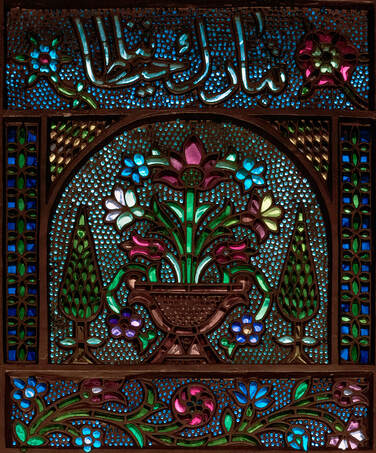 Title: Islamic Stained Glass Window, 17th Century. Order No.: A1-3047. Location: Leighton House, London.
Stained Glass
Islamic glassworkers discovered the technique of staining. Decorators stained glass in a variety of colours, which are often described as "lustre.". First, they painted the surface with a liquid containing finely powdered copper oxide or silver oxide. Then the fired the glass in oxygen-free conditions at about 600 degree centigrade. Scholars believe that staining was perfected in the eighth century.
- Corning Glass Museum
In the seventh century, the Islamic religion spread from Arabria to other parts of Asia, the Mediterranean, and beyond. By the ninth century, glassmaking flourished throughout the Islamic world, especially in Egypt and the Middle East.

Glassmakers in the region developed a new way to decorated glass in the eighth century. They painted it with metallic stain, or "lustre." In the 10th and 11th centuries, they made some of the world's finest cut glass. From the 12th to the 14th century, craftsmen in Syria and Egypt used brilliant enamels. These enameled works were prized as far away as western Europe and China.

Muslin law against depicting living creatures (in religious places) led to the development of exquisite floral or geometric designs on tiles and carpets as well as in mosaics and stained glass.
All images  taken in museums (marked by "RN") are not for sale and are for educational purposes only
Stained Glass