iconography: the visual images and symbols used in a work of art or the study or interpretation of these: the conventional iconography of Christian art.

Visual Art - Iconography
The term comes from the Greek word ikon meaning image. An icon was originally a picture of Christ on a panel used as an object of devotion in the Eastern Orthodox Church from at least the seventh century on. Hence the term icon has come to be attached to any object or image that is outstanding or has a special meaning attached to it.

Icons are most commonly created with tempera paint on wood panels but they can be made using a variety of materials such as metal casting, mosaics, textile works, and frescos. The oldest icons date from the 5th and 6th centuries; and after suffering a temporary setback as a result of the iconoclastic movement they played an increasingly important role throughout the history of Byzantine art, reaching their apogee at the time of the Empire's final collapse.

The icon as a Sacred Image
​The icon is an archaeological record and a work of art. The  Orthodox Church understands the icon to be a sacred image depicting a higher, divine reality. It is a visible reflection of an invisible realm in which all these qualities are simultaneously present. For the past two thousand years the icon has remained a constant image of the eternal and divine.

​An icon as a sacred image depends on the continuous and accurate replication based on a prototype. The icon painter copies from the prototype as accurately as the medieval scribe and illuminator made the exquisite copies of the Bible. Just as the  faithful would not alter the core meaning of a sacred text, such as the Bible, the same hold true of the icon.

​Over time, regional differences and cultural influence allowed for stylistic changes in the icons, each becoming its own distinct work of art while remaining surprisingly constant in its purpose. The icon, no matter the artistic influence, links the viewer directly to the dawn of Christianity when many of the early practitioners were illiterate and relied on visual information to understand the World.

​In order to understand the language of the icon the viewer must desire to meet with this reality: to enter into it, the viewer needs to learn to read the icon. The icon must not be regarded as a simple illustration of the Gospels or other theological texts. Visual form and Word are fused together to penetrate an alternate reality.

​An iconography is a particular range or system of types of image used by an artist or artists to convey particular meanings. For example in Christian religious painting there is an iconography of images such as the lamb which represents Christ, or the dove which represents the Holy Spirit. In the iconography of classical myth however, the presence of a dove would suggest that any woman also present would be the goddess Aphrodite or Venus, so the meanings of particular images can depend on context.

The production of these small images, painted on wooden panels in  an egg-yolk medium, was promoted after the 13th century by a whole series of circumstances. In the first place the practice grew up of hanging at least two rows of icons on the iconostasis (screen bearing icons, separating the sanctuary of many Eastern churches from the nave), considerably increasing the number required; the larger icons in the lower tier represented Christ, or the Virgin and Child, or the patron saint of the church, while on the upper tier were icons of the liturgical festivals, the Deisis or scenes from the lives of saints. A second factor was that in time of disturbance or danger to the Faith - as a result, for example, of the victories of the infidels - one of the ways in which ordinary people could seek reassurance and express their confidence and hope was to have in their homes images of Christ,  the Virgin or the various saints to which they could address their prayers more easily and more frequently than in church. Gradually, therefore, each family came to have their own icons, varying inequality and costliness according to their resources. Theses icons now provide his historian with a mass of evidence, enabling him to observe the long continuance of traditional forms.

​The icon-painters were not much given to innovation: they sought to reassure the faithful that the image would preserve its efficacy and power, and the best way of achieving this was to maintain the traditional patterns which were familiar to all. As time went on, however, other influences came into play alongside this conservative trend. In Eastern Christendom, where much of the population had fallen under the Turkish yoke while other areas remained independent, there was not the same cohesion aa before 1453, nor the same close links with the capital. In Crete, and later even more strongly in the Ionian Island, which still belonged to Venice, Italian influences were powerfully felt. In Russian and elsewhere artist expressed their religious ideal in forms which were no longer wholly Byzantine.

Iconography (or iconology) is also the academic discipline of the study of images in art and their meanings.

Source: Museum of Russian Icons and www.tate.org/art-terms/iconography
Icons illustrate the links and continuity of Greek art and culture from Late Antiquity, through Byzantium, to the present.
Byzantine Icons
Go to: www.ancient.eu/article/1161/byzantine-icons/
Painting on Wood
14th Century
All images taken in museums (marked by "RN") are not for sale and are for educational purposes only
Four Chosen Byzantine Saints
​At the top Saint Anthony the  Great, George the Great Martyr and in the lower register Peter on the left and Paul on the right. The icon maintains its entirely Byzantine character and material nature, and the idiom that the painter uses bears limited resemblance of the characteristic of the Cretan School. 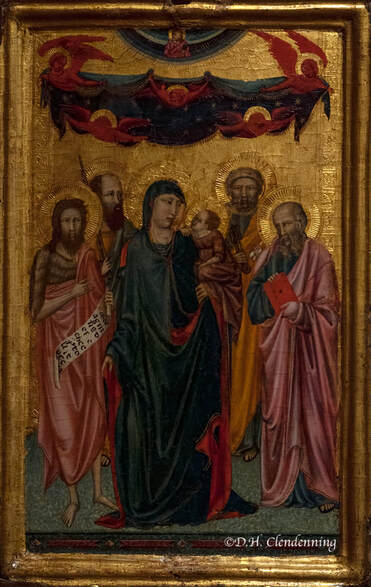 Title: Virgin and Child with Saints, about 1310-15. Egg tempera and gold leaf on panel. Attributed to the Master of the Pomposa Chapterhouse (Italian, active early 1300s) Location: Boston Fine Arts Musuem RN: A1- Location:
15th Century
The Nationalmuseum, Stockholm has an outstanding collection of Russian and some Byzantine icons. Icons are the sacred images of the Orthodox Church. They have their own long-standing visual symbolism which differs radically from that of Western art. Their two-dimensionality, stylization and abstract qualities have provided important sources of inspiration from artist throughout the 20th century up until today.
All images taken in museums (marked by "RN") are not for sale and are for educational purposes only
16th Century 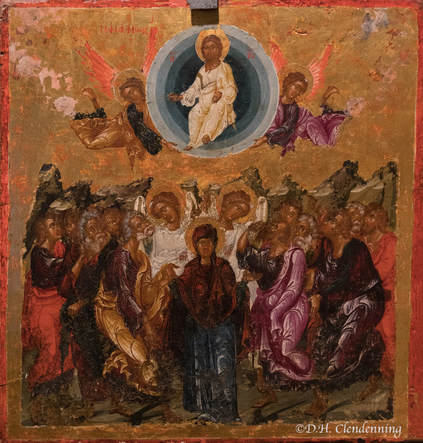 Title: The Assumption, 16th century. RN: A1-9487. Location:Agios Neofytos Monestary, Cyprus.
17th Century
18th Century
19th Century
All images  taken in museums (marked by "RN") are not for sale and are for educational purposes only

A series of reprographics of Russian icons following  traditional stylization
Click on images to enlarge
St. George and the Dragon

The legend of St. George and the Dragon tells of a terrible dragon that demanded human offerings from the town of Selene as its price for not laying waste to the town. The day the King's daughter is to be sacrificed, St. George comes riding by. On condition that the town's heathen inhabitants convert to Christianity, he slays the dragon.
All images  taken in museums (marked by "RN") are not for sale and are for educational purposes only

Title: Royal Doors of an Iconostasis, c.1600, Vologda. Order No.: A1-0966.
There is a rich history and elaborate religious symbolism associated with icons. In Russian churches, the nave is typically separated from the sanctuary by an iconostasis, or icon-screen, a wall of icons with double doors in the centre. Icons are considered to be the Gospel in paint, and therefore careful attention is paid to ensure that the Gospel is faithfully and accurately conveyed.
Old Russian icons are often slightly concave due to the natural warpage of the wood -  sign of originality. All photos are of original icons from a private Russian Icon Collection in North America.

Title: Icon in St. Basil's Church. Order No.: A1- Location: Moscow
References
The Pictorial Metaphysics of the Icon: Abstraction vs. Naturalism Reconsidered