Canada's Great Glass Houses
The list of Canadian stained glass artists and studios for ecclesiastical and domestic use is limited but of high quality. Following is an initial list and more will be added as photographs of their glass are taken.
Click on image to enlarge 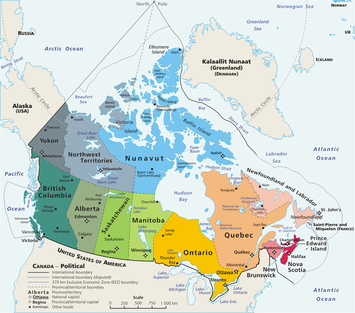 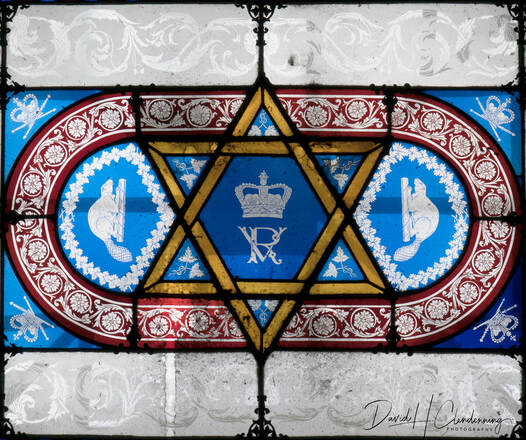 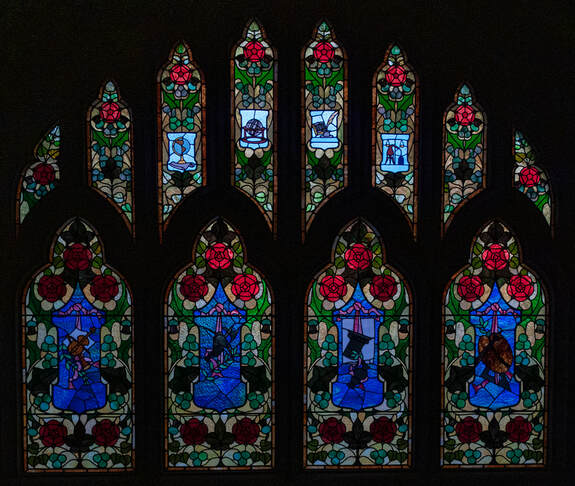 Titled "The Welcoming of a Slain Warrior by Soldier Saints, Champions and Angles", was designed and made by Wilhelmina Geddes, Irish Artist, 1887-1955, a member of Dublin's collective stained glass studio, An Tur Gloine. Her only commission in North America, the window is now recognized internationally an an exceptional work of memorial art. In art circles it is known as the Geddes "Ottawa" Window. The window is regarded by experts as the finest stained glass window in Canada.
After his return to England, The great "Ottawa" Memorial Window was commissioned in 1919 by Prince Arthur, Duke of Connaught (Governor General of Canada, 1911-1916) in memory of Canadian members of his personal staff who fell in WW1. It was unveiled by the Prince of Wales, the future King Edward V111, in Ottawa on November 9, 1919 while he was in Ottawa to lay the stone of the rebuilt Parliament Buildings. 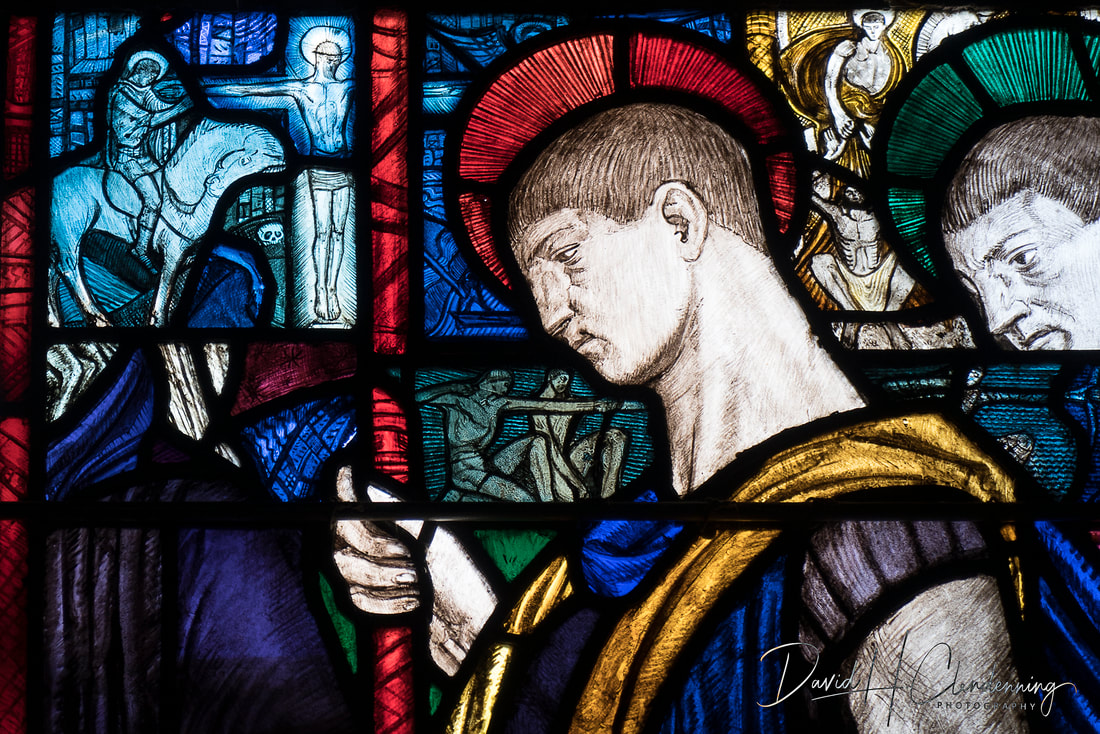 "The Ottawa Window", a Masterpiece by Wilhelmina Geddes, 1919 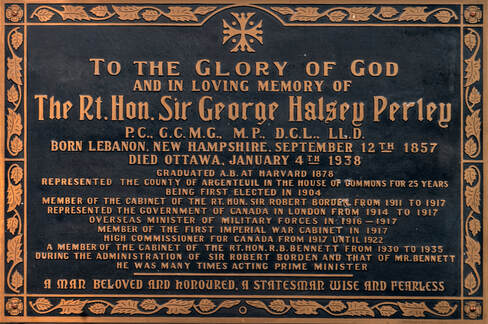 Bronze Memorial Plaque amongst many displayed on the walls in the main church hall
Eastern Ontario Sites
Architectural Details and Studio Signatures
Photo-History Book on The Church of the Sacred Heart of the Blessed Virgin Mary, Wolfe Island, Ontario, 2018. Photos by David Clendenning, Ottawa. 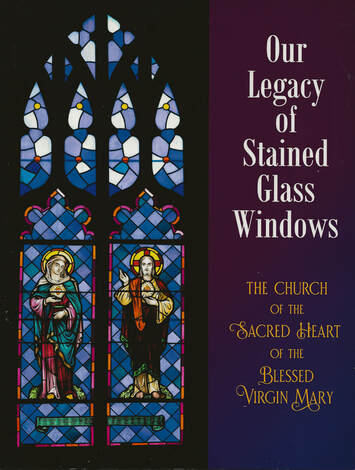 Over the summers of 2017 and 2018, David Clendenning collaborated with the Sacred Heart of Mary Church on Wolfe Island (just off Kingston, Ontario) to produce a wonderful photo book on the history of this 20th century Roman Catholic church. The history of this  island settlement church (1820-2018) began with its first wooden church built in 1852, followed by a second stone church constructed in 1872. In 1916-17, a new and much larger stone church with its soaring Gothic architecture and splendid stained glass windows was built, designed by Power & Son, Architects in Kingston.

"Many have pondered the cost of construction and the colourful ornate stained glass windows during such a complex economic time in Canadian history. How could island families, including still more immigrants, with many mouths to feed, then dealing with the wars and the Depression pay for such extravagance? But somehow the fundraising, family donations, bequests, pew rents, Sunday offering and special collections paid off the debt by 1946".
Book viewed for educational purposed only
​
Click on images to enlarge
Saint Ablan's Loyalist Church, Adophoustown, Ontario

Title: Stained Glass of Mountain Scene, SS Moyie, Steam wheeler, c. 1898. RN: A1-5368. Location: Nelson, BC.
Stained Glass in the English Cathedral of the Holy Trinity, Quebec City (c.1800-1804), Palladian architecture.
Murray Bay Protestant Church, La Malbaie  -  The Tiffany Stained Glass
The Church's famous Tiffany stained-glass is dedicated to the memory of Dr. Samuel Beach Jones (1842-1910), a physician from New York City and a summer resident of Murray Bay.  The satined-glass made by Louis C. Tiffany was installed in 1915, thanks to Rose Tiffany, owner of the La Rose on the Boulevard des Falaises (on road to the Fairmont Manoir Richleau Hotel) . This is one of only three sites in Canada having Tiffany stained-glass.
La Malbaie region of Charlevoix was once the vacation province of wealthy American families and international celebs like Mary Pickford, Charlie Chaplin, and the king of Siam. A young William Howard Taft visited here is 1892 and remarked on its wonderful air quality, and made it his destination for the rest of his life. The French-Canadian villages known collectively as Murray Bay were the nexus of the "Newport of the North" and enjoyed a lively heyday from the 1870s into the 1950s.
Nova Scotia Sites 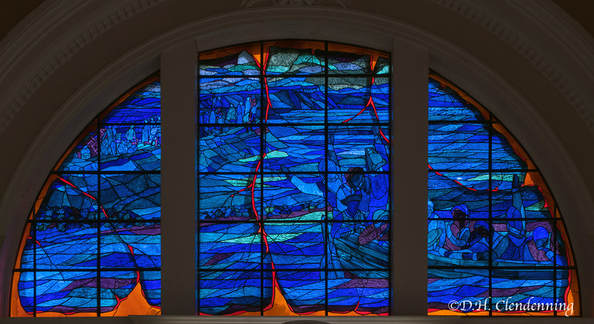 Title: Deportation of the Acadians. RN: A1-9663, Location: Grand Pre Memorial Church, NS.
History Etched in Glass
The installation of the stained-glass window in 1985 fulfilled the Acadian community's dream of having a window grace the front of the the Memorial Church in Grand Pre to commemorate the deportation of their ancestors in 1755.. Designed by artist Terry Smith-Lamonthe of Louisiana Cadien descent.
Stained Glass